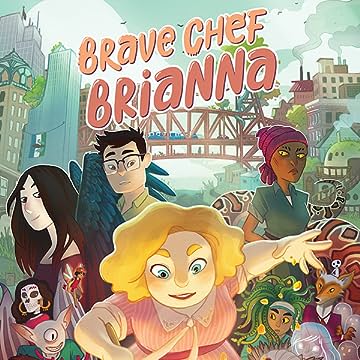 It’s time to talk about another favourite comic! This time it’s Brave Chef Brianna‘s turn, which sadly only has four issues. Though the story is wrapped up neatly and more issues aren’t necessary, I just want them! Four issues is way too short for me haha. So what is Brave Chef Brianna about?

Brianna’s father sets her and her brothers a challenge: the sibling with the most successful restaurant will earn the family empire. There’s only one restaurant allowed per city and Brianna decides to start hers in Monster City.

So why should you read it?

💛 Brianna is a great character. She has anxiety which is portrayed in a very realistic way, which she constantly battles which is very inspiring to see. Despite her anxiety she doesn’t give up

💛 It takes place in Monster City, so there are lots of interesting characters (almost all of them monsters)

Though I wish the story had delved a bit deeper into the history of Monster City and the reasoning of its laws, I thoroughly enjoyed this one. It was a fun read and I especially appreciated Brianna’s portrayal of anxiety. I’d definitely recommend this one (plus it’s a short read so what’s stopping you?)

Have you read Brave Chef Brianna yet? What did you think? Any other comics with great portrayals of anxiety you think I should read? Let me know in the comments!

11 thoughts on “Brave Chef Brianna: Cook With Anxiety in a City Full of Monsters”