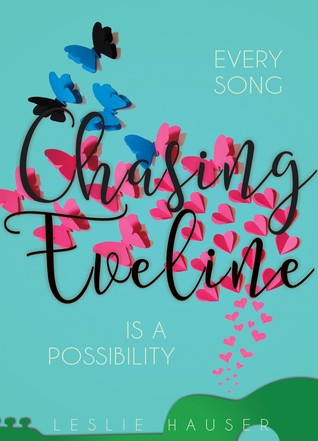 Sixteen-year-old Ivy Higgins is the only student at Carmel Heights High School who listens to cassettes. And her binder is the only one decorated with album artwork by 80s band Chasing Eveline. Despite being broken-up since 1989, this rock band out of Ireland means everything to Ivy. They’re a reminder of her mom, who abandoned Ivy and her dad two years ago. Now the music of her mom’s favorite band is the only connection she has left.

Even though Ivy wavers between anger and a yearning to reconnect, she’s one-hundred percent certain she’s not ready to lose her mom forever. But the only surefire way to locate her would be at a Chasing Eveline concert. So with help from her lone friend Matt—an equally abandoned soul and indie music enthusiast—Ivy hatches a plan to reunite the band.

The road to Ireland won’t be easy, though. And not just because there is no road. Along the way they’ll have to win over their Lady Gaga-loving peers, tangle with some frisky meerkats, and oh yeah, somehow find and persuade the four members to play a reunion gig. It’s a near-impossible task, but Ivy has to try. If she can’t let go of the past, she’ll never be able to find joy in the present (Goodreads).

DISCLAIMER: I received a copy of this book from Netgalley in exchange for an honest review

Chasing Eveline is such a refreshing, cute and realistic contemporary. While going in I did expect more of the book to take place in Ireland, I’m not disappointed at all. The road to get there was fun to read, and it made sense that it took a while. Plus it meant focusing on Ivy’s home life, her pain over her mom leaving them, her relationship with her dad and the friendship between her and her best friend Matt.

Ivy is desperately chasing Chasing Evline*, as it’s the only connection she still has to her mom. She’s slowly forgetting more and more about her, which freaks her out. Chasing Eveline’s music helps her get through her pain, which I found such a beautiful aspect of this book.

One day while I waited, I listened to every Chasing Eveline casette I owned. When the final song ended, I drew the hand clutching my mom’s Walkman to my chest. A faint tingle covered every inch of my skin. My river of misery had turned into a sea of tranquility, and I closed my eyes, desperately wanting to savor the feeling. A lyrical life vest had saved me from another day of drowning pain.

* Ha see what I did there

The writing was absolutely beautiful, especially whenever Ivy was listening to Chasing Eveline and was carried away by their music. It was so easy to feel her pain, yet the book still didn’t feel heavy at all. This was mostly due to her friendship with Matt, which was such a delight to read. At first I was a bit worried that romance might blossom between the two (which wouldn’t have been that bad, since their current relationship was good and healthy) since I absolutely loved their friendship and good friendships between girls and boys are such a rarity in YA. But! Romance never blossoms between the two. Not even a minor crush. Nothing.

Ivy and Matt bond over the fact that they’re both trying to get over someone leaving them and their love for Chasing Eveline. The way they meet is super cute and funny, and I’d love to share it with you but you should just read it for yourself. I marked so many scenes and quotes related to their friendship, because they’re absolutely adorable and just #friendshipgoals. They constantly quote and talk in Chasing Eveline lyrics to each other (dorks) and they constantly support each other. At some point Ivy doesn’t go to school because of a family emergency, and Matt is so worried that he ditches school to find out what is happening, and then just stays with her to support her. Matt is just a part of their family, which really warmed my heart.

Ivy’s relationship with her dad is also beautiful. He’s the only family she has left, so of course she’s very worried about him and constantly takes care of him. I can’t say too much about it since I don’t want to spoil anything, but their relationship is a big part of the book. Also!! When Ivy’s mom left he got her the cuttest dog ever and oh my god I would die for that doggo.

While Ivy’s relationships with Matt and her dad are an important part of the book, the plot itself of course is about trying to reunite Chasing Eveline for one last concert. And that would be in Ireland.  Of course when you’re two regular teens that’s not easy, so lots of shenanigans ensue. While some of those aren’t entirely realistic, they are fun to read about.

I can’t say anything about the ending without giving it away, but I absolutely loved it. It wasn’t what I expected, but it was incredibly realistic. While some of the shenanigans I mentioned earlier weren’t always entirely realistic, the book as a whole did feel realistic. Not just the ending, but the way the romance was handled as well. It didn’t take over as soon as the love interest was introduced, wasn’t forced nor rushed. Chasing Eveline being so realistic is what made it such a breath of air.

I would definitely recommend this one, whether you love contemporaries or not.

Have you read Chasing Eveline? What’s your favourite contemporary? Can you relate to Ivy’s relationship with music? Let me know in the comments!

5 thoughts on “Chasing Eveline // A Breath of Fresh Air”