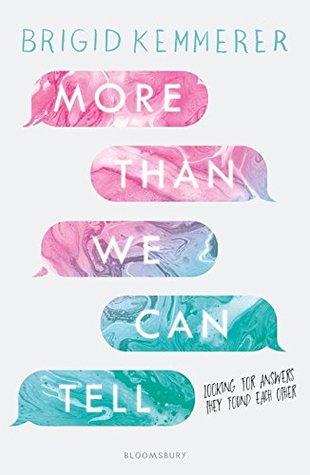 Rev Fletcher is battling the demons of his past. But with loving adoptive parents by his side, he’s managed to keep them at bay…until he gets a letter from his abusive father and the trauma of his childhood comes hurtling back.

Emma Blue spends her time perfecting the computer game she built from scratch, rather than facing her parents’ crumbling marriage. She can solve any problem with the right code, but when an online troll’s harassment escalates, she’s truly afraid.

When Rev and Emma meet, they both long to lift the burden of their secrets and bond instantly over their shared turmoil. But when their situations turn dangerous, their trust in each other will be tested in ways they never expected.

I’ve been putting this review off for a few days, not just because I was too stressed and tired because of schoolwork, but also because I don’t really know what to say. More Than We Can Tell is an important book, and a well written one. There are many good things about it, it just didn’t blow me away or resonated that much with me (or maybe my expectations were a little bit too high?

There are not enough (ya) books in my opinion that deal with abuse, let alone properly*. The way Rev was written felt real to me – I felt his fear in my bones and whereas I haven’t gone through what Rev did, I did find the way he was written relatable. His father is never normalised nor does the author try to get you to symphatise you with him, but she does show us that he’s still a human being, which is so important. Whenever someone is accused of abuse you get the old ‘but they’re so nice!!’ ‘i know them they would never do that!!’ which is exactly the point. Abusers aren’t just going to go around with a big neon sign that says ‘I HIT MY PARTNER/KIDS’. They don’t go around wearing a cape cackling and rubbing their hands. You can’t identify an abuser on the spot

Another message I really liked was that pain is not a competition. We so often feel that way, especially because a lot of us are brought up with the idea that it can be a lot worse. And of course it can be! But that doesn’t make whatever you’re going through any less valid.

I liked how Rev and Emma were able to confide in each other and how their relationship developed. While they do start to form a crush fairly quickly, it starts with a friendship and supporting each other in what they’re both going through. I’m also okay with quick crushes, because those are realistic**. Declaring your love to each other after like day is not. And that doesn’t happen! They’re just a boy and a girl who like each other. That’s it. Also, while the romance is a big part of the book, both Rev and Emma have their own arcs and the romance doesn’t overshadow that.

Both Rev and Emma tend to push people away – Rev because of his abusive father and Emma because of her absent father and controlling mother. It felt like a realistic touch to me, and I like that despite that they still manage to work out their relationship. It takes some work and there are some arguments, but in the end it works out. I also liked that despite that they both had some great relationships in their life. Emma has been horrible to her best friend, and she knows this and hates herself for it. Yet Cait understands that she’s been going through a lot and after Emma apologises, they still work it out.

Then there’s Rev’s best friend Declan, who is such a sweetheart? He’d drop EVERYTHING to be there for his friend which is such a great thing to see since we barely see friendships like that between boys.

Also Emma built her own game!! I always love to see gamer girls in fiction (we do exist!!) and this gal even built her own game? She learnt to code as a little kid and is just a complete badass. Yet there were still some flaws in her game! She was constantly improving it, which is realistic.

While there’s a lot of good things about this book, in the end it just gave me a three-star feeling. I have no idea why, which is really frustrating, but I’d definitely recommend this book.

Have you read More Than We Can Tell? Are you planning to? What are some good ya books that deal with abuse? Let me know in the comments!