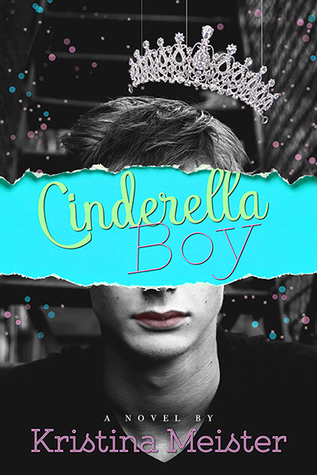 Sixteen-year-old Declan is the perfect son . . . except for one tiny issue. When his sister Delia comes home to find him trying on her clothes, he fears her judgment, but she only fears his fashion choices. One quick makeover later, Declan is transformed into Delia’s mysterious cousin Layla and dragged to the party of the year, hosted by Carter, the most popular boy in school.

When Carter meets Layla, he fumbles to charm her. He adores her sense of humor and her poise. But when she vanishes in the middle of the night, he’s left confused and determined to solve the mystery of who she is.

As their school year begins, their high school embraces a policy of intolerance, and both Declan and Carter know they must stand up. Carter is tired of being a coward and wants to prove he can be a knight in shining armor. Declan is sick of being bullied and wants desperately to be himself. If they team up, it could be a fairy-tale ending, or a very unhappy ever after.

Disclaimer: I was given a copy of this book by Netgalley and the publisher (thank you!) in exchange for an honest review

Well this was definitely a fun read! A genderfluid Cinderella, a queer Prince Charming, a cute romance and queer kids fighting for their rights? Yes please!

I definitely would’ve given this four stars if the first half hadn’t been so slow. The first half mostly consists of Declan/Layla going on dates with Carter and while they were cute I also didn’t really care? There just wasn’t much going on and the main plot was nowhere in sight yet. The first half was just really too long as it really felt like a build up to the second half. I would’ve preferred if it had been shorter and if some of the things that happened in the second half were build up more. Like I would’ve loved to have seen more of Declan’s friendship with Yuki who’s supposed to be his best friend, his relationship with his sister (which was great and adorable and I loved how supportive she was) and Carter’s relationship with his father, as that relationship was very important to him as a person and for his growth, and it kind of felt like it was just squeezed in there. Once we get to the second half though, that’s where the book got really good and I had to continue reading it to see what happens next.

One of Declan’s new friends at his new high school wants to start an LGBTQIAP+ club called The Rainbow Corps (A+ name obviously) but the homophobic principal forbids the club and starts to pull a lot of other homophobic crap after that, but the queer kids at the school don’t back down. Seeing them fight back was empowering and inspiring, and I love the way they went about it (really don’t want to spoil it because it’s so much fun reading it for yourself). While it deals with some harder topics, this book was fun, cute and empowering. The romance has some of my favourite tropes, like one of the characters talking about their crush to their crush without saying that they’re their crush. Did that sentence make sense. Also lots of banter and that epilogue was ADORABLE. Very fanfiction-y but hey it’s a fairytale retelling that’s allowed.

”It’s not a costume for me. It’s not dress-up. It’s not pretend. It’s me, or part of me, an aspect of me that gets to be in that moment.”

I do however unfortunately need to point out that two characters make comments that erase multiple gender attraction. Like when Declan describes his crush to Carter he says ‘he’s just not gay’. Declan knows Carter had a girlfriend, but that doesn’t make him straight? If that comment had been addressed I would’ve been fine with it, but it wasn’t.

If you’re looking for a queer, fun and cute story where a genderfluid MC gets his fairytale ending I’d definitely recommend Cinderella Boy. Please keep going through if like me you have a bit trouble with the first half, because Cinderella Boy is so so worth it and an absolute gem.

Have you read Cinderella Boy, or are you planning on it? Any recs for YA books (fairytale retellings or not) with genderfluid MCs? Let me know in the comments!