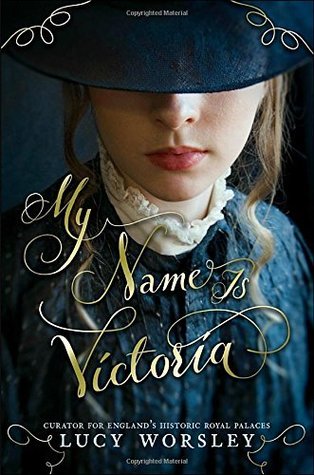 Miss V. Conroy is good at keeping secrets. She likes to sit as quiet as a mouse, neat and discreet. But when her father sends her to Kensington Palace to become the companion to Princess Victoria, Miss V soon finds that she can no longer remain in the shadows. Her father is Sir John Conroy, confidant and financial advisor to Victoria’s mother, and he has devised a strict set of rules for the young princess that he calls the Kensington System. It governs Princess Victoria’s behavior and keeps her locked away from the world. Sir John says it’s for the princess’s safety, but Victoria herself is convinced that it’s to keep her lonely and unhappy. Torn between loyalty to her father and her growing friendship with the willful and passionate princess, Miss V has a decision to make: continue in silence or speak out.

This one was a bit disappointing to me. Last month I read a similar book from Worsley, but about Queen Mary, which I had (mostly) the same problems with as this one, so I guess Worsley’s books are just not for me? Because I love lists* let’s sum up these problems

💛 Not much happens?? This is the biggest problem with both this one and Lady Mary: there isn’t much of a plot. I mean, there technically is, but it doesn’t feel like it because barely anything happens. There’s just,, a lot of talking?

💛 Because of this it’s just,, a bit boring? I feel like this book could’ve been so much more interesting given the concept and the historical people it focues on. I mean there’s so much political intrigue, but because we see everything through the eyes Miss V. we barely know anything about it

💛 That plot twist was,,, not to my liking. This is a very personal thing which led to my two star rating instead of three, and shouldn’t keep you from not reading this book. The plot twist itself was well-written as there were enough hints for it to not be entirely out of the blue, but not that many that it was predictable (though I did see it coming) and Worsley explains that this is an alternative history, just her exploring a ‘what if’, it’s not some conspiracy theory haha, I just personally didn’t like it?

💛 I feel like the characters were just not that interesting either? Worsley knows her stuff, especially when it comes to Queen Victoria, so it’s not a lack of research, but the characters were kinda flat and while we follow both girls through childhood to their teenage years, I just don’t feel they changed much? Also Miss V.’s voice was just,,, so lack-luster?

But!! There were definitely things I liked. Like I said, if it weren’t for the plot twist I would’ve given this three stars*

💛 The friendship between the girls!! They were probably not such great friends in reality, but Worsley wanted to explore this what if and honestly it was lovely. At first they didn’t really know what to make of each other of course, but in the end they love and support each other, want what’s best for the other, would risk anything and everything, know each other like the back of their hand, were willing to give up their own happiness for the other’s… It was so great to see, even though Queen Victoria probably hated Miss V. in reality lmao

💛 Despite not much happening and the characters feeling a bit flat, it’s clear that Worsley knows what she’s talking about. It really does feel like you’re transferred to the 1800s

💛 While Miss. V didn’t change that much, I do like how she eventually stood up to her father

💛 Queen Victoria’s support system! Of course she was isolated, but she still had a small group (including Miss V.) that would do anything for her and loved her with all their heart

💛 Not much is known about Miss V. Conroy, so it’s nice to see more about her

* Honestly me not liking the plot twist probably has to do with the tv show and maaaybe with my crush on Jenna Coleman but,,

Gently, but inescapably, she pulled me nearer until our foreheads touched. ”You are my sister now,” she said quietly and and solemnly. ”Never forget it. I love you like my sister, and you are my only friend in all the world.”

I don’t think Worsley’s books are for me, but if you love historical fiction than I do recommend checking them out. There’s a good chance you won’t have these problems after all!

Have you read My Name is Victoria, or one of Worsley’s other books? What did you think? Do you like historical fiction? What’s your favourite? And do you watch Victoria? (if so I haven’t seen season 2 yet please don’t spoil!) Let me know in the comments!