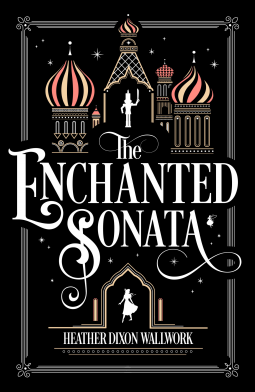 Clara Stahlbaum has her future perfectly planned: to marry the handsome pianist, Johann Kahler (ah!) and settle down to a life full of music. But all that changes on Christmas Eve, when Clara receives a mysterious and magical nutcracker.

Whisked away to his world—an enchanted empire of beautiful palaces, fickle fairies, enormous rats, and a prince—Clara must face a magician who uses music as spells…and the future she thought she wanted.

Disclaimer: I was given an ARC of this book by Netgalley and the publisher (thank you!) in return for an honest review. Also apologies that this is a bit late

The Enchanted Sonata is a retelling of both The Nutcracker and The Pied Piper of Hamelin. While I don’t remember too much about The Nutcracker, it’s a story I always loved (most likely because of that one Barbie movie. I’m pretty sure I watched it over and over again. I also had the dolls. I LOVED it) so I was excited to read a retelling for it, especially since I don’t often see one? Despite it being a popular ballet? And then combined with The Pied Piper? Sign me up!

I have to admit I was a bit bored at times, especially because the story isn’t just told from Clara’s POV, but also other supporting/minor characters. At some point we even get the villain’s POV. This all just took away some of the surprise, plus I didn’t really care for the minor characters? I’d much rather follow Clara and the Nutcracker, whose dynamic I loved. I’m weak for cute banter okay? Their romance definitely put a smile on my face.

As for the worldbuilding, I was a bit confused. It felt like the story relied too much on the reader knowing the original fairytale of The Nutcracker without explaining why there are giant rats attacking the kingdom? The rats are also kind of an afterthought, as the real villain is The Pied Piper.

I was also disappointed in how they found out how to defeat The Pied Piper. Clara is whisked away to The Nutcracker’s world through a fairy book, which tells the story of The Nutcracker. Once she’s all caught up to the present, there’s nothing there for her to read anymore, as she’s now part of the story. But then the book updates, and literally tells her how she will defeat The Pied Piper. It felt so cheap and easy, whereas Clara figuring it out herself would’ve been so much more powerful, especially because in the beginning she’s very motivated by impressing the pianist Johann, instead of doing things for herself. Speaking of Johann, I do love how Clara realises that she barely even knows him and that she was more in love with the idea of him than with him.

That said, The Enchanted Sonata is a fun and cute retelling, that I definitely do recommend! I loved the atmosphere and the relationship between Clara and The Nutcracker. Maybe it was a bit insta-love-y (I don’t remember it that well) but in this case I didn’t mind.

Have you read The Enchanted Sonata? Do you know any YA retellings of The Nutcracker or The Pied Piper? What’s your favourite retelling? Let me know in the comments!