Last month I read a few summery contemporaries that were up for free on Riveted and since I can’t write full reviews for any of them why not review them all in one post?

Belly measures her life in summers. Everything good, everything magical happens between the months of June and August. Winters are simply a time to count the weeks until the next summer, a place away from the beach house, away from Susannah, and most importantly, away from Jeremiah and Conrad. They are the boys that Belly has known since her very first summer–they have been her brother figures, her crushes, and everything in between. But one summer, one terrible and wonderful summer, the more everything changes, the more it all ends up just the way it should have been all along.

To be honest if this hadn’t been free on Riveted I wouldn’t have picked it up. I love Jenny Han, but the blurb never appealed to me and it turns out my intuition was right. I’m honestly surprised that this is written by Jenny Han, because I absolutely love To All The Boys I’ve Loved Before, but The Summer I Turned Pretty is nothing like that. Not much happens in this book, the characters are flat, Belly is whiny and annoying and the writing is just not that good? I know there are mixed feelings about this book out there, but personally I wouldn’t recommend anyone who hasn’t read TATBILB to read this, because it could seriously turn them off. There are more important topics discussed in this book, but it’s barely there and kind of felt like an after thought. I rated it two stars because it WAS a quick read. Don’t get me started on the romance though. I don’t see the appeal of one of the love interests at all and the endgame romance just didn’t feel built up to me? It didn’t come out of nowhere, but that’s mostly because it was predictable not because it was well written.

Classic movie fan Bailey “Mink” Rydell has spent months crushing on a witty film geek she only knows online as Alex. Two coasts separate the teens until Bailey moves in with her dad, who lives in the same California surfing town as her online crush.

Faced with doubts (what if he’s a creep in real life—or worse?), Bailey doesn’t tell Alex she’s moved to his hometown. Or that she’s landed a job at the local tourist-trap museum. Or that she’s being heckled daily by the irritatingly hot museum security guard, Porter Roth—a.k.a. her new archnemesis. But life is a whole lot messier than the movies, especially when Bailey discovers that tricky fine line between hate, love, and whatever it is she’s starting to feel for Porter.

And as the summer months go by, Bailey must choose whether to cling to a dreamy online fantasy in Alex or take a risk on an imperfect reality with Porter. The choice is both simpler and more complicated than she realizes, because Porter Roth is hiding a secret of his own: Porter is Alex…

I ABSOLUTELY loved this one. I gave it four stars because I was missing something (not sure what? Sometimes that just happens) but oh my goodness I flew through it and it was so much better than I expected. It has some of my favourite tropes, including characters not realising who the other is, enemies to lovers, great banter and silly adventures. It’s adorable and fun, yet also meaningful as both Bailey and Porter have to deal with their own trauma. Bailey tends to avoid pretty much everything that’s difficult and that was SO relatable. I loved seeing this in a main character.

And the fact that she and Porter worked at this really weird museum? SOLD. What I didn’t know about this book before going in is that Porter is half-Hawaiian and Bailey’s new best friend (who’s amazing and I loved their friendship) is black. Bailey also has a great relationship with her dad so what more do you want??* Despite my four star rating this is definitely a new favourite. Maybe soon I’ll realise that this is more of a five star read? Who knows I change my ratings all the time lol #reliableblogger

* Honestly I should be asking myself this considering I gave this four stars but as I finished it that just felt right?? 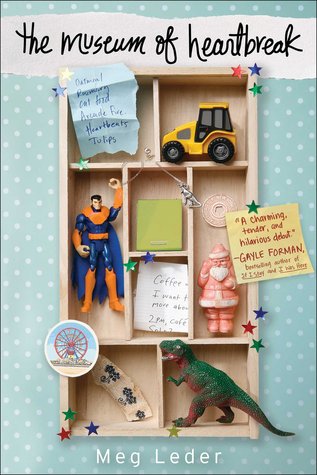 Welcome to the Museum of Heartbreak.

Well, actually, to Penelope Marx’s personal museum. The one she creates after coming face to face with the devastating, lonely-making butt-kicking phenomenon known as heartbreak.

Heartbreak comes in all forms: There’s Keats, the charmingly handsome new guy who couldn’t be more perfect for her. There’s possibly the worst person in the world, Cherisse, whose mission in life is to make Penelope miserable. There’s Penelope’s increasingly distant best friend Audrey. And then there’s Penelope’s other best friend, the equal-parts-infuriating-and-yet-somehow-amazing Eph, who has been all kinds of confusing lately.

But sometimes the biggest heartbreak of all is learning to let go of that wondrous time before you ever knew things could be broken.

My rating is probably more a 2.5 than three stars to be honest. I really loved the premise of this one. Each chapter starts with an item Penelope has curated in her museum of heartbreak: it comes with an illustration and a very short description (title, number of the item and how she’s gotten it, if I remember correctly). I love it when books have formatting like this, but the story itself… I wasn’t very impressed with. It had a lot of potential as Penelope gets into an unhealthy relationship, but the thing is it never really gets addressed how unhealthy and toxic it was? In the end she’s just like ‘I guess I never really liked him that much’ instead of addressing all the red flags that you should definitely avoid in a relationship. This could’ve been such a powerful story, but now I’m afraid it does a little bit more harm than good.

I was also really annoyed with the way Audrey treated Penelope. She wasn’t a bad friend per se, but her new friend Cherisse treated Penelope horribly and she never stood up for Penelope. Even after doing something really horrible to her at the end, Audrey is all ‘I want to be friends with you both I hope you understand’ and Penelope accepts that. In my eyes this just isn’t a healthy friendship and shows readers that you should just put up with everything

Other than that, it just felt a bit flat and underdeveloped to me and I honestly couldn’t tell you what really the point was? I did like the new friends Penelope made and it was a fun and cute read most of the time. If the book had addressed the toxic relationships in Penelope’s life it would’ve already been a lot better.

Phew, I’m glad I got those out of the way. I’m surprised at how long my review for The Museum of Heartbreak turned out because I really thought I had forgotten most of it lmao

Have you read any of these? What did you think? What’s your favourite summer read? Let me know in the comments!