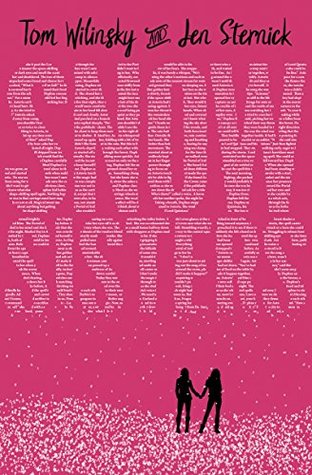 High school students—Soph, who attends private school in Manhattan, and Tess, a public school student who lives on a dairy farm in New Hampshire—are thrown together as roommates at a week-long writing conference. As they get to know each other and the other young women, both Soph and Tess discover unexpected truths and about friendship, their craft, and how to hold fast to their convictions while opening their hearts to love.

The biggest problem I had with this book is the way the trans character was written and treated.  Since I am cis I can’t speak on behalf of the trans community, but I do want to share my concerns. I couldn’t find any own voices reviews, but if you know of one or have written one please let me know so I can link to it!

Now, in the beginning of the book we get a warning that the two main characters are ‘unreliable narrators’ and there’s a link where you can find trigger warnings for the book (which I do applaud!) but… That’s honestly not good enough.

I’m going into details of how Orly was treated, so if that’s triggering for you, you might want to stop reading.

At the writing program, Soph and Tess meet a girl named Orly, who we soon learn from Orly’s roommate Chris is trans. You know how we learn this? Because Chris tells Tess that Orly is a guy. Chris constantly misgenders Orly and says she ‘feels unsafe’, but in actuality she’s trying to ‘get a story’ out of it to sell (she wants to be a journalist), bullies her and tries to get all the girls at the program to be against her. There’s a horrible transphobic ‘prank’ played by her and a lot more nastiness, but in the end, Chris is kind of forgiven. I’m not saying that the authors condoned this kind of behaviour, but they didn’t do enough to condemn it either. In a lot of ways it even felt like the authors were trying to get us to sympathise with Chris, by showing her crying, letting her tell ‘her side of the story’, Tess continously trying to be nice to her and trying to be her friend and she even says ‘All I was trying to do was understand both sides and not leave anyone out’ CHRIS IS A TRANSPHOBE THERE’S NOTHING TO UNDERSTAND ABOUT THAT AND HELL YEAH YOU LEAVE HER OUT

Not to mention, Orly and how she was treated by the other girls felt like it was just there for the development of Soph and Tess, two cis characters. When the novel starts, Tess tells us she has an interview to get into a certain school, in which she has to describe a recent incident where she took the lead. Guess what incident she’s takes the lead in!!

Meanwhile when we meet Soph she tells us that her mom doesn’t get that ‘it’s completely safe for her to be out’ and ‘it’s not the 1950s. For about 90% of the novel Soph is constantly pressuring people to come out of the closet and preaching that ‘it’s better for everyone to come out’. I get that this was to emphasise that she’s from a big city or whatever, but I’m Amsterdam which is supposed to be a very LGBTQ+ friendly city and I don’t tell everyone that I’m bi?? Because I don’t know if that’s safe?? I also just don’t understand how someone can be this naive. Soph is from New York – are you seriously saying that she’s never experienced or saw someone else experience any form of homophobia? Even when Tess tells her it’s not easy for her to come out, that her friend was beaten up by his father, Soph still doesn’t get it and even says ‘You know it’s better to come out, Tess. Everyone is safer if we all come out and find each other. Don’t you want to live without having to keep that secret?’ She doesn’t think of Orly’s situation when she finally realises that coming out isn’t the same for everyone, but it did feel like Orly was being used for this purpose.

Orly plays a big part in this story and so does the transphobia, but the story is never told from her perspective, just the two cis main characters who are basically her cis ‘saviours’ and that just felt wrong to me, especially since all of this was used just to further Tess and Soph’s stories and development.

Another thing that really pissed me off, is the fact that Tess’ sexuality was basically used as a plot twist. Like I said, we are told Tess and Soph are unreliable narrators. I don’t know in which way Soph is an unreliable narrator, but Tess is one because throughout the entire book she keeps the fact that she’s gay and that she’s in a fake relationship with Joey to protect him from his homophobic dad from the readers. It made it feel like Tess’ sexuality was a big plot twist, especially the way it was revealed, which just left a vile taste in my mouth. There was no reason to keep this from the readers. The romance would’ve been relatively the same except build up better because now it seemed to come out of nowhere.

There’s also bi-erasure as Soph immediately assumes a girl is straight when she talks about her boyfriend. Other sexualities than gay and straight exist.

This book is just such a mess and I doubt the finished book will be much different, considering how big the transphobic arc is (which you don’t even get from the blurb, which is really insensitive considering how triggering all of this can be). I really wanted to like this book, as it takes place at a writing program and has sapphic girls falling in love. I thought it would be like Fangirl (Tess writes fan fic and excerpts of that fan fic are shared) but gay, but instead I got this mess.

NOTE: I may have forgotten to mention a few things as I’ve marked A LOT of things (mostly problematic stuff, a few just… bad writing which I didn’t even touch upon because that just feels insignificant in the light of the problematic aspects), but these are my biggest problems with this book.

What do you think of all of this? I’m too angry to even form questions abghs Please share recommendations of good books with good rep about sapphic writers falling in love I need it