I’m back to talk about more comics! Before I talked about Shoot Around and Lumberjanes, today it’s Rock and Riot’s turn (and believe me there are a lot more coming).

So what is Rock and Riot about? Taken from the comic’s tumblr:

Rock and Riot follows the tales of opposing teenage gangs in the 1950s with an LGBTQ theme! Will the teams set aside their differences to fight for what they have in common?

Doesn’t that sound great?! If that hasn’t convinced you yet, here are some reasons to read it:

‘LGBTQ THEME’ IS NOT AN EXAGGERATION

No one’s straight?? There are so many different gender identities and sexual orientations in this comic it’s amazing! There are lesbians, bisexuals, panromantics, pansexuals, demisexuals, asexuals, trans characters, an agender character, aromantics, a genderfluid character, a demiboy, a bigender… And I think I haven’t even mentioned all of them at this point. IT’S GREAT. 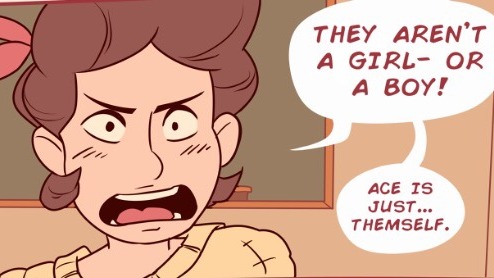 Not everyone is white yay! And so many different body types!! That no one gets shamed for!!

CHARACTERS ARE UNIQUE AND RELATABLE AND JUST GREAT

Sometimes I hate myself for adding titles because honestly what can I add to that. THEY’RE JUST GREAT OKAY. They’re all so cute and funny and relatable sfnsghd I love them. Also they’re so much more than their gender identity and/or sexual orientation, though they are topics that are dealt with 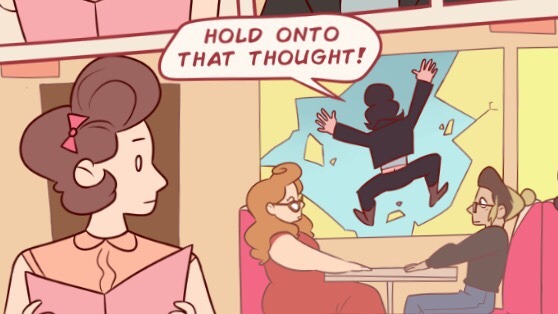 THEY ARE IN GANGS

Which is so much fun! Like not the killing kind of gangs but the ‘I am cooler than thou’ kind of gang with amazing friendships. There’s a girl gang (with a trans girl in it!), a boy gang and an entire gang of teens who don’t stick to the gender binary and they’re definitely the coolest gang. SUPER CUTE RELATIONSHIPS THAT WILL BE THE DEATH OF YOU

I’m not joking you will die

I don’t want to spoil anything, but… IT WAS GREAT. I need to see more of these

Just look at it! It’s so cute and colourful

IT TAKES PLACE IN THE FIFTIES

Honestly I love the fifties but… Not good times. So it’s great to see a story take place in the fifties and be so diverse and positive (though there are obstacles as well of course, especially a big one going on right now but it looks like the characters will fight it yay!)

It’s just super fun and cute and relatable and so diverse!!! It’s great trust me. I already linked to the tumblr where you can read it, but I’ll do it again. So if you want to read this amazing comic (YAY) click here.

Are you reading Rock and Riot? What do you think? Are you reading any similar comics that you’d recommend to me? Let me know in the comments (fun fact I wrote comics instead of comments at first woops)!